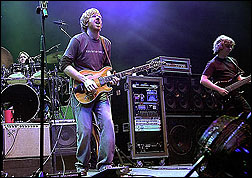 Located amidst the rolling hills and lush green valleys of Vermont's Northeast Kingdom, "Coventry" will be Phish's seventh "city-size" festival, with an expected turnout that will qualify it as Vermont's most populated city for the weekend of August 14-15. As with all prior Phish festivals, "Coventry" will see the band performing three live sets each day, with on-site camping as well as numerous attractions and art installations created by teams of talented artists and performers.

Previous Phish events have been held at the former Loring Air Force Base in Limestone, ME; the former Plattsburgh Air Force Base and the Oswego County Airport in New York. In 1999, Phish performed before 80,000 fans at the Florida Everglades' Big Cypress Seminole Reservation in what is generally acknowledged as the largest paid audience in North America to celebrate the millennium.

Tickets for "Coventry" are $149.50 (plus applicable service fees). Gates for the event will open at Noon on August 12. Ticket prices include up to four nights of parking and onsite camping. There is a limit of six tickets per person.