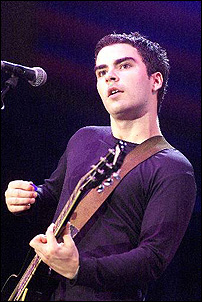 Stereophonics' record label bosses are threatening legal action after fans got their hands on the band's next album – weeks before its official release.

The Cwmaman trio's fourth album, You Gotta Go There To Come Back, is not released until June 2.

But a copy of the 13-track recording is already available for free on some websites.

The band is just the latest to fall prey to illegal internet downloaders, joining Radiohead, Super Furry Animals, Madonna and many others.

They recently experienced the same embarrassment, their forthcoming albums being leaked online up to three months in advance.

The 'Phonics had been expected to preview tracks from the new disc on a May promotional mini-tour, ending in Cardiff on the eve of the release.

They will front a press launch with a special signing session at the Welsh capital's Virgin Megastore on June 1.

But the album was this week published on a downloads website, and has since spread to other destinations on the internet.

The band's independent label, V2 Records, was not aware of the disc's availability.

Giles Drew, head of new media at the label, said it would be threatening legal action against any sites hosting the album, through a "cease and desist" letter issued via the British Phonographic Industry.

"It doesn't take much to guess it will happen – whenever you send records out, they get offered," he said.

You Gotta Go There To Come Back will be available to buy as a legitimate download, via Peter Gabriel's OD2 subscription music service, at the same time as the high street release.

V2 itself is due to roll out secretive new techniques aimed at stopping song trading on file-sharing networks in the next couple of days, said Mr. Drew, who would not elaborate.

A Stereophonics spokesperson suspected the source of the leak was a promotional copy, many of which are sent to members of the press for reviews purposes.

"It's not a surprise. Promos of the album were sent out months ago," he said.

"It's a phenomenon and I don't know how it happened. There is nothing anyone can do about it."

Online music piracy is a huge annoyance for record companies, despite industry efforts to shut down software which lets computer users swap songs.

Internet copying is to blame for a 4% slump in UK sales, according to the British Phonographic Industry.

The emergence of advance copies is an additional worry which may be traced to promo copies or even original masters of recordings.

Record labels recently began sending instant messages to those sharing music, warning they are breaking the law and are easily identifiable.