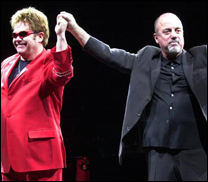 CHICAGO (CelebrityAccess MediaWire) – Elton John and Billy Joel will not bring their dueling pianos show back to Wrigley Field in Chicago this summer. According to UPI, Elton, who is currently promoting his musical "Billy Elliot”, currently playing in Chicago, is disappointed.

"It's not my decision, it's Billy's," Elton exclaimed in a satellite TV interview Dean's List/A-List in Chicago.

"He has decided to take a year off It doesn't gel with my plans but he's a friend. And as an artist you have to respect his decision.'

John said he was "bitterly disappointed," of the cancelled performance at Wrigley Field. "That's the church," he said.

John told WGN-TV, Chicago "As far as I know, there will be no more Billy and Elton shows after the Albany show in New York on March 11th and that breaks my heart since I was so looking forward to coming back there. I'm heartbroken and very cut-up. It's not my decision, it's Billy decision but unfortunately, that's not going to be happening." –by CelebrityAccess Staff Writers