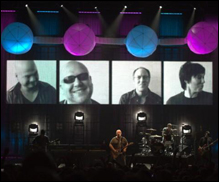 SANTIAGO, Chile (CelebrityAccess MediaWire) — The Pixies played their first-ever headline show in Chile at the Teatro La Cupula in Santiago on Wednesday.

The band's scheduled performance happened to fall on the very night that the 33 miners were dramatically rescued from 69 days trapped 2000 feet below the surface of the earth.

"We were so moved by this story," said Pixies' Black Francis according to the press release, "by how many lives had been affected by this, and how the Chilean people banded together to support what can only be described as a miracle…We played a special set at tonight's show, 33 songs for the 33 miners, the longest set we've ever played as a band. We found out five minutes before we went on stage that all of the miners had safely reached the surface. This was definitely one of the most meaningful shows we've ever played."

Black Francis introduced the set, saying that while he doesn't speak much Spanish, the band knows that this was a special day in Chile and a time for real celebration.

A short clip of this introduction was posted on YouTube.

The Pixies' special 33 Songs for 33 Miners set (plus two encore songs) consisted of:

ENCORE:
Where Is My Mind
Gigantic