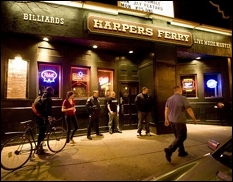 BOSTON, MA (CelebrityAccess MediaWire) — Concert promoter Don Law and his partners are making moves to create the stepping stones for bands to grow from small-town gigs to stadium-filling legends.

Don Law, who is acting apart from his affiliation with Live Nation, according to The Boston Globe, and partners Joe Dunne and Declan Mehigan are seeking to take over Harpers Ferry nightclub in Allston, MA. The trio are imagining the 340-person venue to be a "feeder" club for the Paradise, a newly renovated venue with a capacity of 850, also owned by Law, Dunne, and Mehigan and aligned closely with Live Nation.

“We need a club that is a first step, and we think this would work so acts would then grow into the Paradise,’’ says Law according to the Boston Globe.

Law will be meeting with the Allston Civic Association and Boston Licensing board with the hopes to open the venue, tentatively dubbed the Brighton Music Hall, in December.

As for renaming an Allston club the Brighton Music Hall, Law says, “I don’t know if it’s Allston or Brighton, but it’s close enough for rock ’n’ roll,’’ according to the Boston Globe.

Live Nation booking agent Ryan Vangel who will oversee initial booking of the Brighton Avenue venue gave his insight on how he envisions the vision for the club. "What we meant was a developmental room…We can’t go all the way down to doing house parties. But this is a place where a band can get started, grow to the Paradise and go on to the House of Blues. You can almost look at baseball and their farm teams — if you do well, you’ll move up. So we’ll be more in touch with smaller, developing bands," according to The Boston Phoenix.

Vangel currently books roughly 285 shows a year around Boston, including the full slate at the Paradise, about half the calendar at the House of Blues, and big-ticket concerts at the Bank of America Pavilion and Orpheum.

Vangel, the financial support behind the successful Fenway Recording Sessions at Great Scott, not far from the Harpers space in Allston is practiced in the feeder system. The shows at Great Scott brought blossoming acts like the Tings Tings and Hot Chip to Boston with the idea of them playing larger, Live Nation-tied larger rooms on their next swing through town.

The Allston club has served as a hot spot for college students to catch major acts and local rock, blues, hip-top and funk since 1970, and has hosted acts including Maroon 5, Fall Out Boy, and Steven Tyler among others. According to a press release, the 40-year-old club will shut its doors after Halloween weekend and will feature Christine Occhino's pop and R&B set as the last performance on October 30th.