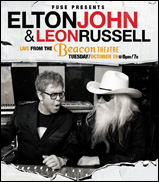 NEW YORK (CelebrityAccess MediaWire) — Elton John and Leon Russell are set for an October 19th performance at the legendary Beacon Theatre in New York City in support of their new studio album, "The Union". If you want to see the show but can't make the scene, you can check it out live on the Madison Square Garden's dedicated music channel, Fuse TV.

The show will feature songs from "The Union", which hits stores the same day, as well as a selection of classics and hits from their individual careers. For this concert, Elton and Leon will be accompanied by musicians from The Union studio sessions, including Jay Bellerose on drums, Russ Paul on the pedal steel guitar, Marc Ribot on guitar, Jackson Smith on guitar, Keefus Ciancia on keyboards, Mike Compton on mandolin and Dennis Crouch on bass.

With sponsorship by the Coca-Cola company Elton and Leon will join artists including Maroon 5, Drake, Jay-Z, John Mayer, Dave Matthews Band, Kanye West and Fall Out Boy who have all taken the stage for the "Fuse Presents" series.

The 'Union' tour will mark the first time that Russell and John have performed on stage together since 1970.

"In the late '60s and early '70s, the one piano player and vocalist who influenced me more than anybody else was Leon Russell," Elton said. "He was my idol."