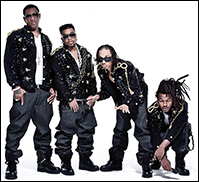 CHRISTCHURCH, NZ (CelebrityAccess) — American R&B group Pretty Ricky sparked a controversy after a concert in Christchurch on Saturday when one of the members of the group allegedly performed a sex act on a female member of the audience during the show.

According to New Zealand's Newstalk ZB, the group was 20 minutes into their performance at The Bedford in Cristchurch, when one of the group's members selected a woman from the audience and started performing the unspecified sex act on her.

"We were basically subjected to something that was quite pornographic and it just made me feel sick, and wrong," Dr Abby Suszko, who attended the show told Newstalk ZB.

Matiu Workman, who also attended the show, expressed similar feelings, describing himself as 'disgusted' and 'disappointed.'

Workman told Newstalk ZB that one of the members of the group selected the woman and told her “no matter what happens, do not close your legs.”

However, Pretty Ricky's penchant for raunch is nothing new and the band has hits such as 'Grind On Me' and 'Your Body' and are known for giving audience members lap dances during shows.

"[The band] do it at every single show. If you listen to the song Grind On Me, it is a song about grinding with each other," Sam King, the promoter of the group's Christchurch show told Stuff.nz.

A rep for the band did not reply to a request for comment. – Staff Writers