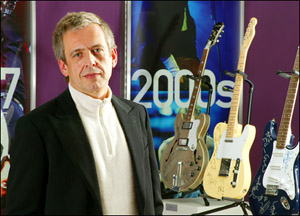 In the newly created position, Hallett, who will report directly to Phillips, will be responsible for overseeing the overall development and implementation of the organization's international business strategies as well as the day-to-day supervision of all international touring activities including talent acquisition, booking, promotion and tour publicity. Additionally, Hallett will be part of the development team creating new arenas and other concert venues throughout Europe including projects currently underway in London, within the Millennium Dome and Berlin. Hallett will be based in AEG LIVE's recently opened international headquarters in London.

"With AEG LIVE's ongoing expansion into the European touring market, it became clear that this was an important and necessary position for us to create," said Phillips. "Having the opportunity to fill this role with such a well-respected and exper-ienced individual such as Rob Hallett made the decision to immediately hire him an easy one. From the increased number of international tours AEG LIVE will be promoting this year to the development of arenas in both London and Berlin and the purchase of the Manchester Evening News Arena, our European presence has never been higher."

An experienced industry professional with a wide-range of international touring experience, Hallett most recently acted as Head of Music and board director for The Meanfiddler Music Group Plc, setting up the successful International touring division. Prior to that, he worked for ten years, as both an agent and promoter, with Barrie Marshall at Marshall Arts. Over the last 20 years, Hallett has played a substantial role in the touring careers of artists such as Adam and The Ants, Duran Duran, UB40, Dexy's Midnight Runners, Talk Talk, Kajagoogoo and Psychedelic Furs among others. Over the last decade, Hallett was directly responsible for Pan European tours by Artistes such as R Kelly, Jay Z, JA Rule and Ashanti, 50 Cent, Usher, Justin Timberlake, Back Street Boys, Britney Spears, Destiny's Child and Mary J Blige among others.

"The opportunity for me to continue working with some of the world's biggest touring Artistes whilst consulting on Europe's most exciting new venues and building a new organization all at the same time is an irresistible combination, said Hallett. "Although AEG LIVE may be a new name to Europeans right now, by the end the year we will have established a company that will be one of the leading players in International touring. Watch this space…"

John Meglen, Co-President of AEG LIVE Tours & Special Events, commented, "With Rob's exceptional international relationships and experience, he is an incredibly valuable asset to our rapidly expanding worldwide touring division. We will rely heavily on Rob not only to signing artists but to play a key role in all of our international tours as well as the promotion of concerts in the new venues AEG will own and operate throughout Europe." – CelebrityAccess Staff Writers