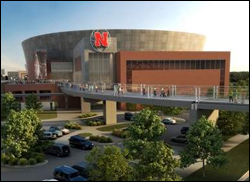 LINCOLN, NE (CelebrityAccess MediaWire) — Lincoln city officials are looking to build a brand new $340 million sports and entertainment arena but some are questioning if the market can support another major venue.

The proposed arena, envisoned as a replacement for the aging Pershing Center, would host live entertainment and serve as a home to the Cornhuskes, the University of Nebraska's men's and women's basketball. The Pershing is showing signs of its age and has proven unable to accommodate some larger shows.

Any new arena however, would face some stiff competition in the market. According to the Omaha World-Herald, more than 70,000 arena seats have been built within 200 miles of the proposed Lincoln Arena site within the last 8 years.

"In the Midwestern market, there are a lot of venues competing for concerts,” John Kaatz of CSL International in told the World-Herald “At least at the start, you're going to have to make sure the deal is appropriate for the promoter to take that risk."

One of the proposed arena's primary competitors would be the Qwest center in nearby Omaha. The Qwest center already has an established prescence and the Omaha market has approximately 500,000 more residents.

“We compete with everybody. That's just the reality of it,” Roger Dixon, president and chief executive officer of the Metropolitan Entertainment and Convention Authority which manages the Qwest told the Omaha World-Herald "It gets down to who has the … better track record selling tickets." – CelebrityAccess Staff Writers