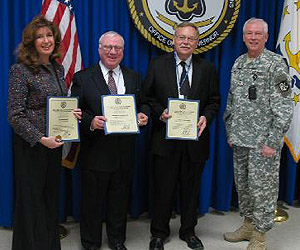 PROVIDENCE, RI (CelebrityAccess MediaWire) -– PPAC President J.L. "Lynn" Singleton and Chairman of the PPAC Board of Trustees Joseph W. Walsh, Esq. were formally recognized for PPAC's support of military members through their "Seats for Service Members" programs by the Rhode Island National Guard on February 11, 2009 at the Rhode Island National Guard Headquarters in Cranston. Sue Stenhouse, Director of Community Relations, Office of the Governor, was also honored. Major General Robert T. Bray presented the honorees with certificates, and each received a challenge coin. According to MG Bray, challenge coins are given to people who provide outstanding support, to prove membership in a unit or career field and to enhance morale. It is considered to be a great honor to receive a challenge coin and MG Bray noted, "The efforts of PPAC, on behalf of the men and women of the RI National Guard, were certainly deserving of this accolade."

"PPAC is very grateful for this special recognition from the RI National Guard and the courtesies extended to us by MG Bray and his team. There are so many men and women from RI who unselfishly dedicate their lives to protecting our country and we only hope the 'Seats for Service Members' program will let them know how much PPAC, as well as the entire community, greatly appreciate their outstanding sacrifices and courageous efforts. We would also like to thank the program's very generous sponsors, who's funding made these tickets donations possible and we look forward to continuing the program for many years to come," said Singleton.

The "Seats for Service Members" program, launched in the spring of 2008 and provides preferred orchestra seating for PPAC Broadway, Contemporary, and family shows to Rhode Island service members and their families. Originally funded by PPAC's existing Annual Fund Community Outreach dollars, "Seats for Service Members" is now funded by local community sponsors, and 100% of all sponsorship dollars go directly to purchase the tickets for Rhode Island service members participating in the program. Anyone interested in becoming a sponsor for this program should contact Adriane Schoen, Executive Assistant for Development, at donors@ppacri.org or by telephone at (401) 574-3122. – CelebrityAccess Staff Writers