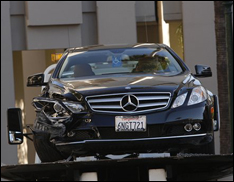 According to the Los Angeles Times, the 64-year-old Chasen was shot multiple times in the chest while in her car at the intersection Sunset Boulevard and Whittier. People familiar with her movements told the Times that Chasen had attended an after party at the W Hotel in Hollywood following the premier, and was on her way to her Westwood home at the time of the attack. She was reportedly alone in the car.

Chasen was a veteran publicist who worked with a range of clients that included Natalie Wood, composer Hans Zimmer, and film producers such as Dick Zanuck and Irwin Winkler.

At the time of her death, Chasen was working on publicity for the "Burlesque" soundtrack and the best actor Oscar campaign for Michael Douglas in "Wall Street 2: Money Never Sleeps," Variety reported.

While police have not commented on a possible motive or suspect for the attack, investigators have seized computers from the offices of Chasen's business, Chasen and Co.

"She wasn't a shady character," publicist Howard Bragman told the LA Times. "It's a small community and she was one of the fixtures in it."

"She had been doing this forever. She had a lot of class, a lot of style and a lot of intelligence. She was just very, very well-respected," Bragman added. – Ian Courtney