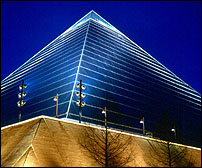 MEMPHIS, TN (AP) — Photos of Eric Clapton, Jerry Garcia and Penny Hardaway line the walls of the management offices at The Pyramid, reminders of the arena's glory days. Today empty desks and vacant offices better tell the story of the Pointed House on the Mississippi River.

The staff of The Pyramid, which had about 30 full-time employees a year ago, has been slashed to 11. The building, which had been hosting 135-150 events a year, including Grizzlies and Tigers games, now may have just 30-40, including eight graduations.

With the opening of the FedExForum, The Pyramid is no longer the area's primary entertainment venue. In the words of general manager Alan Freeman, it's more an "afterthought."

A few miles to the east, things are quiet at the Mid-South Coliseum as well. Folks there know what staffers at The Pyramid are going through. The Coliseum was Memphis's premier site for sports events and concerts until The Pyramid opened in 1991.

The building, which opened in 1964 and once hosted the Beatles, now plays to community events.

Both older arenas are adjusting to new rules.

Most concerts and other major events can't play either building without permission of the Grizzlies, who operate the FedExForum. The no-compete clause, which has been interpreted strictly by the NBA franchise, has caused the Coliseum and The Pyramid to lose out on several events.

"Instead of actively, aggressively going after events that could bring in revenue for the building and support our operating expenses, we are forced into waiting for the phone to ring," Coliseum general manager Steve Fox said.

For Freeman, it's the first time in his more than 25 years in arena management that he hasn't had a basketball team playing in his building. "It's very difficult. It gets depressing sometimes."

While a public-private committee studies the future of The Pyramid and Coliseum, Freeman and his Pyramid staff are also busy brainstorming for alternative uses of the building.

"We're doing a lot of work on telephones, trying to generate business that is nontraditional business for this building," Freeman said, including using it as a rehearsal site or for movie shoots.

For Denise Brown, building operations director at The Pyramid, life after the Grizzlies remains busy.

"We're still maintaining the building as though we were going to have 18,000 people in the house tonight," she said, but it's nothing like the 16- to 18-hour days she used to put in.

"It seems very strange. … We have a good attitude about it, but it's almost like we're waiting for the other shoe to drop."