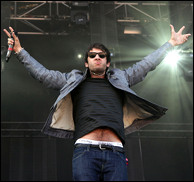 LONDON (VIP NEWS) — UK Rapper Example has said he thinks the recent "boom" in the UK's festival industry has come to an end.

The rapper said many festivals which have started in recent years are going under because of what he describes as the "amateur" way they're being run.

Example performed at more UK festivals than any other act in 2011.

He said: "A lot were promoted badly, had bad security, were in bad locations or the line-ups hadn't been programmed well, so they didn't make sense."

He says he played around 25 or 26 festivals in the UK throughout the summer of 2011.

Speaking to Newsbeat he said: "Some of them had a great theme, a great location and great line-up and the people running them knew what they were doing. And there were other ones which seemed to me were really amateur.

"There was a boom a few years ago.

"Every second person wherever you went was starting a festival in the UK.

"Anyone whose dad owned a farm. Obviously a lot of them are starting to go under."

It's not just some small or medium-sized events which have been forced to rethink in 2012.

Already this year Oxegen festival, The Big Chill and – last week – Sonisphere have been cancelled.

In a statement Sonisphere explained that they were "unable to run the festival to a standard that both the artists and that Sonisphere's audience would rightly expect".

While other established events experienced sluggish ticket sales in 2011, Example thinks the big names in the festival calendar will survive.

"The main ones will still be there," he said. "Reading and Leeds struggled last year. I think maybe that's because guitar music's not as big as electronic music at the moment.

"But festivals, to survive, just really need to think about their theme, who their market is and book the suitable acts to sell it out.

"There's still a demand for people to go to festivals even with the economy and the state that it's in."