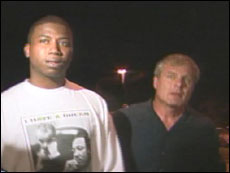 DECATUR, Ga. (AP) — Just days before the expected release of Gucci Mane's debut album, the rapper is in jail, facing a murder charge.

Mane, whose real name is Radric Davis, is accused of the May 10 shooting death of a man whose body was found in woods near a middle school, DeKalb police spokesman Herschel Grangent said.

Grangent would not say what linked Mane to Henry Clark's death. The rapper waived his appearance at a hearing Friday and remains in DeKalb County Jail until a bond hearing.

The 25-year-old's album, "Trap House" is expected to be released Tuesday. A publicist for Atlanta-based Big Cat Records did not immediately return a phone call seeking comment.

Mane's attorney, Dennis Scheib of Atlanta, said the rapper was at a home on May 10 with a woman and a male friend when five men came to the house and attacked them. Mane grabbed a gun on a table and traded fire with one of the attackers in self-defense, Scheib said.

The men fled and Mane did not know that any were injured, his attorney said. He also did not know the attackers but believed they were associated with rival rapper Young Jeezy.

"I think police need to look deeper into this case instead of just looking into my client," said Scheib.

Mane is known for the songs "So Icy" and "Black Tee."