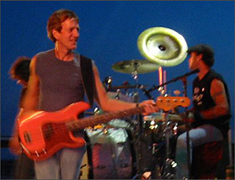 NEW LONDON (CelebrityAccess MediaWire) — Steve Kaika, bassist and vocalist for the iconic Connecticut-based rock band The Reducers, died on Tuesday after a battle with cancer.

The 4-member band recorded three well-received albums in the 1980s, but never managed to break out fully into the national scene, passing on numerous deals with major record labels and instead going with their own label, Rave On Records. Over the years, the band shared stages with artists such as the Ramones and The Replacements, hit the road for several national tours and even Japan where they enjoy a strong following. The band also continued to perform regionally and meet every Friday night in New London for a rehearsal.

"I've always said, some guys play golf or have poker nights," fellow band mate Peter Detmold told the New London Day. "For us, The Reducers is our club. It just happened that the four of us found each other and it worked."

Kaika's death comes just days before a benefit concert in New London's Hygienic Art Park that had been planned to help his family with medical bills. Detmold will emcee the event, which will also feature performances by local bands Dogbite, Ken Atkins & the Honky Tonk Kind The Rivergods, the Original Sinners and special guests. Proceeds from the event will go to help Kaika's family.

"We always assumed there'd be another Sailfest gig, another Labor Day at Ocean Beach," Detmold told the Day during an interview last week. "I hope it still happens. I've always felt lucky to play with these guys, and I've known that one of us can't be replaced. We've been inseparable, and we'll always be inseparable. It's just us." – CelebrityAccess Staff Writers