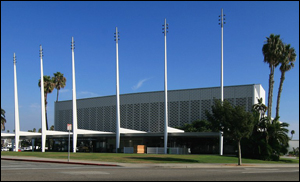 SANTA MONICA (CelebrityAccess MediaWire) — The Santa Monica City Council has approved plans to spend $47 million in an effort to restore the Santa Monica Civic Auditorium to prominence as a performing arts and concert venue.

According to local news source The Lookout, the money was allocated from Santa Monica's Redevelopment Agency (RDA) after a close four-to-three vote, based in part on the willingness of Nederlander to partner with the city over producing shows at the venue.

The exact extent of the rehabilitation for the venue has yet to be decided, but supporters of the auditorium estimate that it needs at least $25 million in upgrades to make it earthquake resistant and bring it into compliance with the Americans with Disabilities Act.

Originally built in 1958, the multi-purpose convention center can accommodate up to 3,000 fans when configured as a concert venue.

According to the Lookout, the venue is currently used primarily for trade shows and subsidized by The City to the tune of more than $3 million each year. The agreement with Nederlander is expected to cut the required subsidy by $2 million and estimated to bring $18 million in additional revenue to local businesses.

The Nederlander deal, however, is expected to lower that subsidy to about $1 million and bring in an estimated $18 million in revenue to local businesses, as well as cultural and entertainment value to the area. – CelebrityAccess Staff Writers