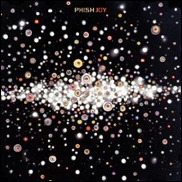 BURLINGTON, VT (AP) — The finicky fans of Phish have never been much satisfied with the Vermont jamband's studio offerings — if they were, they wouldn't go to such extremes to catch the band live.

"Joy," the foursome's first post-reunion record, is one of the band's strongest, most self-assured albums in more than a decade, the surest sign since the March reboot concerts in Hampton, Va., that Phish intends not just to hang around awhile, but to keep pushing onward and upward.

It doesn't matter. Months will pass, live versions of these tracks will integrate into the two-plus hour sets, and no matter what fans think now, jubilation will eventually erupt with the first strains of "Backwards Down the Number Line," "Light," "Sugar Shack" and "Time Turns Elastic," four tunes off of "Joy" that stand out here as potential monsters in the Phish canon.

As a whole, "Joy" is grounded, unfussy and songwriting-driven. This album is remarkable for its clarity and focus; through multiple listens, individual instruments shine within the intricate weave, a credit to producer Steve Lillywhite, who might otherwise have been tempted to bog down its sprightly tracks with an unnecessary jumble of sonic layers.

Instead, they crackle with an in-the-room presence, like the propulsive "Light," a whirling, ecstatic bliss-out, at once a driving rocker in the vein of The Who (circa "Quadrophenia") — and vehicle for the most blindingly brilliant notes of vocal harmony that Phish has ever sung.

"Backwards Down the Number Line" sweetly lauds lifetime friendships, and for good reason: Guitarist Trey Anastasio openly acknowledges that the song is a reflection of the band's delicate but dedicated internal dynamic, and the tone is purely sentimental without being cloying. It's an anthem to the bonds among Phish followers as much as it is to Phish itself, and it works.

"Time Turns Elastic," clocking in at some 13 minutes, is the band's first full-out prog-rock odyssey since "Guyute" from 1998's "Story of the Ghost," four records ago. Heavy, plodding and ponderous at points, the thing is actually loaded with delightful rewards along the way, then lands squarely on its feet; like traversing a twisty and treacherous stretch of road, it's a journey worth suffering a few times — being that it becomes quite a thrill once you get the lay of the land.

CHECK THIS TRACK OUT: "Party Time" is the title track of a bonus disc that's available with the deluxe box set of "Joy"; this "second album" contains 13 tracks of outtakes, live recordings and songs that didn't make the album. It wasn't made available in time for critical review, but the rowdy, mostly instrumental jam (lyrics consist of "Party time!" being shouted over and over) killed on the band's '09 summer tour, sending fans who've never heard it into dancing pandemonium.