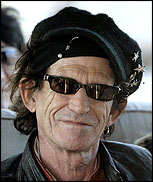 LOS ANGELES (CelebrityAccess MediaWire) — Despite much rumor and speculation regarding a Rolling Stones 50th anniversary tour in 2012, the band's guitarist Keith Richards said it just isn't in the cards this year.

According to Rolling Stone, unnamed insiders are suggesting that Richards health may also be an issue.

Richards suffered a head injury in 2006 in the middle of the Bigger Bang tour and fans reported that his live performances seemed weaker afterwards. After the tour, Richards stopped playing guitar, telling Jimmy Fallon in 2010 that: "You are looking at a very rusty Keith Richards right now. If you've been on the road for two years and suddenly you stop, you put it down for a little bit. And then a little bit longer and you say, 'I really got to catch up, man.'"

The source went on to suggest that the band may instead opt for multi-night stands at select major arenas. "For example, they'd do 10 nights at MSG, 10 nights at Staples, 10 nights at London's O2 arena," the source suggested.

The band has also reportedly solicited offers from major promoters, including Live Nation and AEG, as well as their long-time promoter Michael Cohl, formerly chairman of Live Nation.

Last year, Live Nation and Cohl traded lawsuits over a number of issues, including rights to the tour. – CelebrityAccess Staff Writers