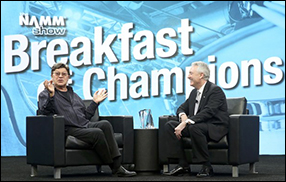 ANAHEIM, Calif. (CelebrityAccess) — Songwriter-musician and Rock & Roll Hall of Fame inductee Robbie Robertson was presented with The National Association of Music Merchants (NAMM) "Music for Life" award for his decades of musical contributions, which have influenced musical genres, songwriting, and guitarists, as well as numerous film scores, compositions and even his own autobiography, Testimony.

The award was presented during the 2017 NAMM conference's opening "Breakfast of Champions" session by NAMM President and CEO Joe Lamond, who introduced Robertson with acknowledgment of his career achievements.

"Emerging from the melting pot of blues, jazz, folk and rock and roll, Robbie Robertson came of age during a time of great musical and social change which is still reverberating today. And with a seat at the table of some of the most memorable music moments of our lifetime, he has inspired countless to pick up an instrument and find their own voices," Lamond said while presenting the award.

The award recognizes Robertson's lifetime of contributions to music, including his time with Bob Dylan, and Robertson's work as co-founder and songwriter of his own group, The Band.

In addition to his work in live music, Robertson's contributions extend to the world of cinema, with his work appearing in films such as Raging Bull, The Color of Money, Casino, The Departed and The Wolf of Wall Street, and Silence, to name a few.

The "Music for Life" award is NAMM's highest honor and recognizes individuals or organizations that exemplify NAMM's vision of music making as a precious element of daily living for everyone. Past recipients have included business leaders, public officials, and musicians, including Stevie Wonder, Yoko Ono, Henry Mancini, Smokey Robertson, and the 2016 recipient, Graham Nash. – Staff Writers