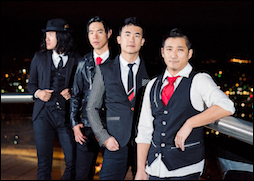 PORTLAND, OR (Hypebot) – Asian-American indie band The Slants took their trademark fight to the Supreme Court this week. Despite being together for more than a decade, the group has been unable to get their name registered as a federal trademark because the U.S. trademark office views it as offensive.

After The Slants went before SCOTUS (Supreme Court of the United States) this fighting to trademark their name, the band's founder and bassist, Simon "Young" Tam released a statement:

"I'm confident that the Supreme Court will stand by the Court of Appeals for the Federal Circuit's decision in finding viewpoint discrimination through trademark registration unconstitutional.

What many people forget is that this process all started with the government denying me rights based on my race: even in court, the government agreed that our racial identities provided the context for 'The Slants' to be a racial slur rather than any other possible definition for the word. In other words, the government alluded that anyone could register 'The Slants' if they had the right context – or in this instance, if they were of the right race. That's simply wrong. It perpetuates institutional racism.

I've spent almost 8 years in court – almost a quarter of my life – so that I could fight for marginalized communities to have their voices protected. Voices that are often silenced in fear of a football team regaining their trademark registrations. Our obsession to punish villainous characters should not justify the collateral damage that the undeserved experience. Part of taking up the cost was possibly being forever associated with a team who I find disagreeable, but it was for the greater good of justice. Being the target of both white supremacist groups and even a few organizations that normally support my work will all be worth it if it means a more equitable society.

I hope that our case encourages others towards having robust conversations of racial justice in order to create better law."

The band also released a music video for their song, "From The Heart," an open letter to the United States Patent and Trademark Office (USPTO) and those who would rather shut down the band’s social justice efforts without actually considering how things might affect their communities.

"From The Heart" is the first single off the band's forthcoming EP, The Band That Must Not Be Named (In Music We Trust Records).