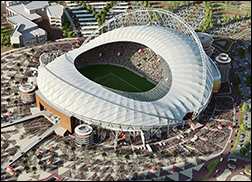 DOHA, Qatar (CelebrityAccess) — A British man died during the construction of the Khalifa International Stadium on Thursday in Qatar on Thursday, after a construction platform collapsed.

According to the BBC, construction firm, Midmac-Six Construct said the 40-year-old man's safety line was severed in the collapse of the platform, which is used to manage sound and lighting at the under construction stadium.

The man was employed by a South African subcontractor, which was working for a German firm, the BBC said.

Qatar has come under criticism for its safety practices at the stadium, which is being built for the 2022 World Cup. In 2013, the International Trades Union Confederation published a report that said more than 1,200 foreign workers have died on the construction project between 2010 and 2013. In 2015, Amnesty International raised concerns about human rights issues around the stadium and accused Qatar of employing forced labor at the construction site.

At the time, Qatar said it was "concerned" by the allegations and would investigate.

"This kind of incident is becoming all too common… and it's unacceptable that basic health and safety precautions are not being followed," British Labour party shadow sports minister Rosena Allin-Khan said of the incident. "Fifa and the Qatari authorities are putting profit before safety." – Staff Writers