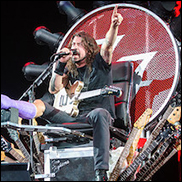 The lawsuit against the insurance companies alleging they have "failed to pay amounts that even they appear to recognize are due and owing" on insurance claims the band made on several shows cancelled during its 2015 world tour.

The first part of the suit has to do with cancellations that came after Dave Grohl broke his leg on June 12, 2015, during a show in Gothenberg, Sweden (a show that Grohl finished before going to the hospital). The injury resulted in the cancellation of seven shows, three of which are at issue in the band`s complaint — two shows at London`s Wembley Stadium and one at Edinburgh`s BT Murrayfield Stadium.

After his leg was treated, Grohl went on to perform 53 shows from the "throne" he designed (or crutches) — an email included in the Foo Fighters` complaint, purported to be from the underwriters at the London insurance firms, said of Grohl: "the guys [sic] a beast!" Three of those 53 were intended to be make-up shows for fans — and the distinction thereof is the crux of the Foos` complaint.

"After paying certain amounts owed under the Cancellation Policy for four of the cancelled performances," the complaint reads, "[the insurers] began searching for ways to limit their payment obligations on the other three performances, including the two Wembley Stadium shows, which represented the largest potential gross income" for the band`s tour. The complaint continues, that insurance broker "Robertson Taylor failed to adequately advise the band of the potential impact these additional shows could have on their claim for coverage… Specifically, Robertson Taylor failed to adequately inform the band that, if it decided to add these shows to the Tour, the London Market Insurers would attempt to re-characterize the cancelled Wembley Stadium and BT Murrayfield Stadium performances" as being "rescheduled," which would dramatically reduce the amount those insurers would owe in a claim.

(The complaint also alleges that Grohl`s insistence on carrying out the tour saved insurers "tens of millions of dollars in claim payments" that would have been owed had they cancelled the entire tour.)

The Foos' accuse Robertson Taylor of milking them for detailed information — "using the promise of a prompt payment as pretense" — on those three news shows, and that the broker was "quietly working" with the insurers it had hired, "without consulting with or advising Foo Fighters," in order to help the insurers reclassify the three shows as postponed.

The second part of the Foos` complaint deals with four shows cancelled in the wake of the horrific terrorist attacks in Paris last November — the first scheduled in Turin, Italy the day after the Paris attack, and the same day the band`s website was hacked with a pro-ISIS message by the group "Team System DZ."

"Foo Fighters reasonably expected that the Terrorism Policy would provide them coverage for the four November 2015 performances, which were necessarily cancelled as a direct result of terrorism," the complaint reads. "While [the insurers] have engaged in a seemingly never-ending series of requests for increasingly irrelevant information, particularly as to the necessity of cancelling the Turin and Barcelona performances, they have not provided Foo Fighters with any indication that they dispute coverage for the cancellation of the Paris, France and Lyon, France performances."

"To date, seven months later, however, London Market Insurers have not paid or offered to pay a single penny of Foo Fighters’ terrorism coverage claim."

The Foos are seeking damages, punitive damages to cover London Market Insurers` and Robertson Taylors` "despicable" conduct, and attorney`s fees. –According to Billboard