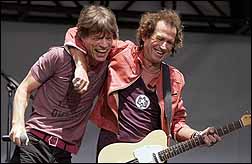 NEW YORK, NY — (CelebrityAccess MediaWire) – The Rolling Stones announced today the kick off of the Rolling Stones World Tour at Boston’s legendary Fenway Park on August 21st. With 35 dates already confirmed in the U.S and Canada, the band will then tour Mexico, South America, the Far East and finally Europe in the summer of 2006.

Fans, along with hundreds of members of the U.S. and international media gathered at Lincoln Center, were treated to the ultimate surprise performance by the Rolling Stones. As the first note blared across the plaza, a giant banner with eye-popping signature tongue logos dropped revealing the band performing on the balcony-turned-stage of the 100 year old conservatory, Juilliard. Mick Jagger, Keith Richards, Charlie Watts and Ronnie Wood played three songs for an ecstatic crowd marking the first time the Rolling Stones performed at a press event since 1975 when they sang “Brown Sugar” on top of a flatbed truck as they rode down 5th Avenue.

The Rolling Stones Onstage will once again showcase their diversity as musicians and performers by playing three dramatically different venues from the grand scale excitement of a stadium, to the thrill of an arena to the intimate setting of a theatre and club with special set lists. This year’s tour takes the concert experience to the next level by bringing together the advantages of an up-close club experience with their electric stadium show.

“The band is redefining the concert experience—there is nothing even comparable to the thrill of being onstage with the Rolling Stones and seeing a stadium show from the band’s perspective,” said Michael Cohl, tour promoter. “For fans this will be the greatest tour yet.”

Rolling Stones Onstage will combine the spectacular production and charismatic performances that fans have come to expect. The band will be working closely with the design team responsible for the sensational sets, dramatic effects and state-of-the art technology on previous tours from “Steel Wheels” to “Licks.”

The Rolling Stones hold the record for the top 2 most attended North American tours of all time.

Fans are able to enjoy special access to tickets, exclusive merchandise and can also follow the tour online at www.rollingstones.com. For the first time ever, concert goers will be able to see the exact seat locations and choose the price level of tickets before purchasing a platinum membership to the fan club. Every ticket sold for the tour will include a free Virtual Ticket membership in the Rolling Stones fan club. Updated daily, users will be given an exclusive insider’s look at every aspect of the tour. From rehearsals and preparations to on-going coverage via audio and videos streams, downloads, set lists and news and much more.

Tickets will go on sale May 14th for Boston, Washington DC, Atlanta, Miami, Charlotte, and Calgary, with additional markets and dates to follow

A new studio album, the first to be released since 1997's Bridges of Babylon, will be released to support the tour by Virgin Records.

Rolling Stones World Tour 2005/2006 will be presented by Concert Productions International and The Next Adventure and produced by WPC Piecemeal Inc.

NEW YORK (AP) — Roll over Beethoven, and tell Tchaikovsky the news: The Rolling Stones announced a new album and world tour Tuesday with a three-song mini-concert at one of Manhattan's bastions of classical music, the Juilliard School.

The familiar crunching riff of "Start Me Up" was greeted with a roar from hundreds of fans filling Lincoln Center from its plaza to its rooftops, as sixtysomething lead singer Mick Jagger launched into the lyrics.

"Thank you very much guys," Jagger told the cheering crowd at the century-old conservatory on a sunny spring afternoon. "This is one of the earliest concerts we've played."

The brief show promoted the tour that begins Aug. 21 at Fenway Park, where the legendary rock dinosaurs will play in front of the Green Monster. Dates in North America will continue through December.

The as-yet-untitled new album is "about 85 percent done," Jagger said. It would be the first collection of all-new material from the Stones since 1997's "Bridges to Babylon."

Prices will average $100-105 per ticket, with seats for the first shows – in Boston, Washington, Atlanta, Miami, Charlotte, N.C., and Calgary, Alberta – going on sale Saturday. Shows will continue next year in South America, Asia and Europe.

The North American dates will alternate between stadiums, arenas and smaller venues. The last Stones tour, in 2002-03, generated $88 million in ticket sales in North America during its first year.

Along with "Start Me Up," the Stones debuted a new song – "Oh No Not You Again" – before tearing into "Brown Sugar." A flub in the new material prompted Jagger to turn a bit professorial.

"I think the examiners at Juilliard would have us come back and retake that one," Jagger said as guitarist Keith Richards shrugged. It was the Stones' first live performance at a press event since they played while riding a flatbed truck through Manhattan – a stunt recreated last year by U2.

Watts said this was the last Stones' tour, but his bandmates were quick to contradict that claim.

"We don't plan that this is the last tour, and we certainly don't announce it," said Jagger, calling that "a trap" aimed at getting money from fans. "We take each tour as it comes."

Richards, 61, said money was not the point of this return to the road. "You can have the money," he told a journalist asking about the potential windfall from the tour.