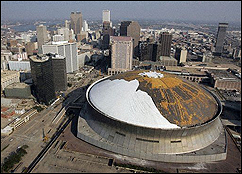 NEW ORLEANS (CelebrityAccess MediaWire) — The NFL will be considering relocating the New Orleans Saints to Los Angeles if the south Louisiana city is unable to recover from the devastation of Hurricane Katrina.

The Saints home, the Louisiana Superdome, should be cleaned up and ready to go for at least part of this season, but that may not be enough to hold them in the city.

The NFL is concerned that the area will not be able to fully bounce back and is looking into the possibility of having the Saints continue playing in their temporary hometown of San Antonio for next season, then move permanently to Los Angeles, according to a report by the Washington Post.

The Saints have been based in San Antonio since being displaced by the hurricane in August, but the league has no interest in that city as a permanent home for the club, according to the paper.

The NFL has been actively seeking a return to Los Angeles, the second-largest television market in the country, since the Raiders left for Oakland after the 1994 season.

A decision to move the team would be a major blow to civic pride and morale in New Orleans as it seeks to rebuild. Louisiana Governor Kathleen Babineaux Blanco plans to make a case for keeping the franchise in the city when she meets with NFL Commissioner Paul Tagliabue this weekend.


The Saints have played two home games at the Alamodome in San Antonio and have a third scheduled to be played there in December. The team will also be playing four home games in Baton Rouge, Louisiana, beginning Sunday against the Miami Dolphins.


The Louisiana Superdome was damaged by the hurricane and its subsequent use as a shelter for people displaced by the storm, but officials said the building remains structurally sound and they have begun repairing it. The repairs will cost an estimated $125 million to $200 million and could be completed as soon as mid-October next year, Superdome officials told the paper. They added that they are debating whether to begin previously planned improvements that could cost an additional $175 million.

State officials are hopeful that the Saints will be able to split their schedule between LSU’s Tiger Stadium in Baton Rouge and the Superdome next season.

Even before Katrina hit, there were reports that team owner Tom Benson was interested in moving the team after this season to San Antonio, where he has strong business ties, or to Los Angeles or Albuquerque, according to the Post.

The team has also already taken steps to void their lease at their training facility in Jefferson Parish, which was damaged beyond repair by the storm and from housing emergency crews and federal agencies.

According to the paper, the team has until November 27th to exercise a clause in their Superdome lease that would enable them to void the lease and leave the city without having to repay the state $81 million in subsidies if the Superdome is unusable. State officials said they would contest any attempt by the Saints to exercise that clause. –by CelebrityAccess Staff Writers