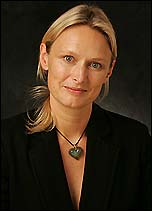 “Sam has proven herself as one of the leading music agents in the business and we are thrilled to be bringing her impressive talents and roster to William Morris,” said WMA’s Worldwide Head of Music, Peter Grosslight. “This is an exciting time for William Morris as we continue to build the premier Contemporary Music Department in the business.”

Addressing her move to WMA, Kirby said: “It’s exciting to join a company that uses its strong foundation in the business to develop and pursue burgeoning opportunities for themselves and their clients.”

Kirby, who attended the University of Bristol in England, began her career in Los Angeles at Chaotica, an agency, which through a merger, became Artists and Audience Entertainment. In 1999 she joined Evolution Talent in New York City. Kirby currently represents, and will bring with her to William Morris, such clients as, Basement Jaxx, Billy Corgan, Bjork, The Crystal Method, The Dandy Warhols, Fatboy Slim, Groove Armada, Morcheeba, Secret Machines, Spiritualized and Zero 7. Kirby will be based in WMA’s New York City offices. –by CelebrityAccess Staff Writers