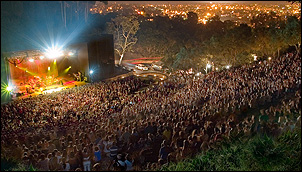 Santa Barbara, CA (CelebrityAccess MediaWire) — The Santa Barbara Bowl, which is exclusively booked by Nederlander Concerts, celebrated its 70th Anniversary Concert Season this year with spectacular sold out concerts including Paul Simon, Jimmy Buffett and two nights with Dave Matthews and Tim Reynolds. Now, the Santa Barbara Bowl Foundation is set to start the largest construction project in the history of the Bowl, the Pavilion – the centerpiece of the Bowl's renovation and restoration Master Plan. The three-walled permanently covered proscenium will sit atop the stage to improve acoustics, mitigate neighborhood sound and support more lighting and concert equipment.

As one of America's finest examples of Works Progress Administration Craftsman architecture, the Santa Barbara Bowl has become the crown jewel of the City of Santa Barbara's cultural scene. When the Santa Barbara Bowl Foundation was granted responsibility through a 45-year lease with the County in 1994, the Foundation created a Master Plan for renovations and improvements. The Foundation is responsible for completing a multimillion dollar restoration and renovation Master Plan as approved by the city and county. The first phase of the Master Plan was completed in 2004 with $10,000,000 in renovations, including the investment of $750,000 to rebuild the stage to carry the weight of the new permanent stage housing – The Pavilion.

The Pavilion is the centerpiece of the Bowl's renovation and restoration Master Plan as well as its future: it is what will enable top-tier acts to continue to play the venue. When the Pavilion is complete it will hold approximately 30% more weight, thus accommodating more lighting, associated sets, props, lifts and "video walls" that are becoming an increasingly important part of every major act today.

Design plans, construction documents and preproduction for the Pavilion were finalized during the summer of 2006. The construction of the Pavilion is scheduled to begin mid-November 2006 and estimated completion is set for the Spring of 2008. The majority of construction is carefully phased over two off-seasons to not impede on the community's concerts. The first phase of construction will create the basic structure including the steelwork, concrete, trusses and much of the electrical work. The second phase will complete the cosmetics and finishing items such as the stonework, interior acoustical material, finishes, and copper roof.

The second phase of upgrades will include; The Overlook – an upper-level terrace with concessions and restrooms, The Canteen – designed to serve high quality food from local restaurants, seating upgrades, expanded box office and lower plaza – facilities including improved traffic and entry areas. These upgrades are paid for by The "American Classic Campaign" a $12,000,000 campaign for the restoration and renovation of the Bowl – stage, seating, food service, box office and the Glen. – CelebrityAccess Staff Writers