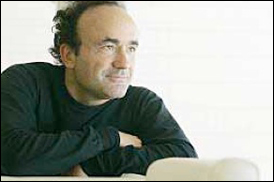 “I am pleased to announce that Frédéric Chaslin has agreed to become the Opera’s new Chief Conductor. His three-year appointment ends a more than two year search which included extensive conversations with Orchestra members, artists and leaders in the music field. Maestro Chaslin brings a distinguished career as conductor, pianist, composer and author to The Santa Fe Opera. In his debut last season he established a wonderful rapport with his colleagues both on and off the stage, and especially with the Orchestra. As chief conductor, Maestro Chaslin’s primary responsibility will be to maintain and enhance the high artistic standards and quality of the Opera Orchestra. With his background, he is eminently qualified.”

“We were delighted in our discussions with Maestro Chaslin to learn of his admiration for the Company, and his interest in becoming a part of our organization. He will open the 2011 season conducting a new production of Gounod’s Faust, and at least one production each season in subsequent years,” stated MacKay.

“My appointment is the meeting and perfect combination of a place and orchestra, and a team,” Maestro Chaslin responded. “The orchestra of The Santa Fe Opera has been extremely responsive and I felt a real and rare communication between the players and myself. I just loved working with the management and all the team of the Opera who collaborate in a very nice and open spirit with the artists. In addition, I met a very enthusiastic group of patrons with such a diversity of origins, opinions, domains of activity, but all aiming at one goal: supporting their Opera with a real passion for music. So, what more could a conductor ask for?”

Although Maestro Chaslin does not officially begin until October 1, he plans to spend August in Santa Fe meeting with the Orchestra, discussing future artistic matters and taking in the five productions.

As conductor he has led important productions in major opera houses world-wide; performed as pianist; composed music for film and symphony orchestra; written an opera, Wuthering Heights; and is the author of Music in Every Sense, which is to be published in English this fall. – CelebrityAccess Staff Writers