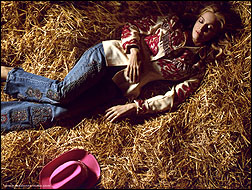 Tickets have been so hot around the world for Madonna, but perhaps, not as steaming as in Germany.

To boost readership, the online German magazine Thermal, described as an outrageous rag with a reputation for sexy pranks, has offered a free Madonna concert ticket in Berlin in return for sex with a staff member.

Prostitution is not illegal in Germany. The ticket cost $110. "I didn't know reporters were so hard up for sex that they have to give away their Madonna tickets," a Madonna spokesperson said. "That's just astounding!"