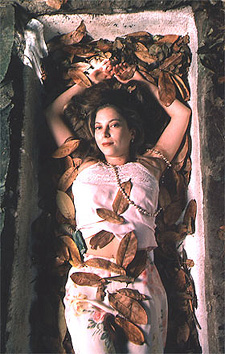 Shana Morrison, Van Morrison's daughter, will release her second album and first on Vanguard Records on April 2. "7 Wishes" is produced by Steve Buckingham and features 10 original compositions, and two Van Morrison-penned tracks, “Naked in the Jungle” and “Sometimes We Cry,” the latter of which he contributes backing vocals and harmonica.

In 1999, Shana self-released her debut album, "Caledonia," which was the name of a Van Morrison song and his father’s now-defunct record store. She has amassed an ever increasing following in the San Francisco Bay Area with her band, Caledonia. In that same year, she collaborated with Grammy-nominated producer/slide guitarist Roy Rogers on "Everybody’s Angel."

Since forming in 1995, Shana and her band have played numerous local clubs, benefit concerts, festivals, and shared the stage with Bonnie Raitt, John Lee Hooker, Lyle Lovett and Keb’ Mo’ amongst others.

Shana began her musical career in 1993, when she joined her father’s Rhythm and Soul Revue as a featured artist. Shana toured the UK, Ireland and Scandinavia and appeared on "A Night in San Francisco," performing the song “Beautiful Vision.”