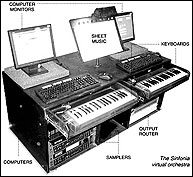 COSTA MESA, CA (CelebrityAccess MediaWire) — A December 21 performance of the musical “Oliver!” at the Orange County Performing Arts Center was met by about 30 protesting musicians.

Members of the Orange County Musicians Association were displeased that the show would be performed by 10 live musicians and a machine called the “Sinfonia” instead of a completely live orchestra of at least 24 people.

"The only reason for the virtual orchestra is to replace live musicians," said Orange County Musicians Association President Frank Amoss told the Daily Pilot. "We're here to preserve the art that musicians have been dedicated to for hundreds of years and have dedicated their lives to."

The vice president of marketing and communications for the Orange County PAC, Todd Bentjen, denied Amoss’ accusation that the Sinfonia is hurting musicians. "If the alternative is that this tour didn't happen, which is probably the other likely scenario, there would be a lot more people out of work, and audiences wouldn't have the opportunity to enjoy this production."

Bentjen went on to note that the virtual orchestra machine was used in two prior shows with no complaints from the audience. "The fallacy of what these unions are trying to suggest is somehow without the use of Sinfonia there'd be 30 pieces in the orchestra." –by CelebrityAccess Staff Writers