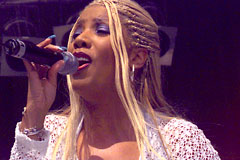 American pop singer Melanie Thornton, 34, died Nov 24, when her flight from Berlin to Zurich, Switzerland crashed in bad weather as it was approaching Zurich International Airport. Thornton was traveling to Zurich as part of a European tour to promote her album Ready To Fly.

For many years Thornton was the voice of La Bouche with whom she had worldwide multi platinum sales successes with songs such as "Sweet Dreams," "Fallin' In Love" or "Be My Lover." With her singing partner, rapper Lane McCray, she celebrated worldwide successes with La Bouche and obtained gold and platinum awards in more than 15 countries.

Her latest solo single, "Wonderful Dream," was recorded for a new Coca-Cola commercial and per her families wishes, was released as planned in Europe Nov 26.

Memorial services will be held in Switzerland and Germany, and later this week in Melanie’s hometown, Atlanta.