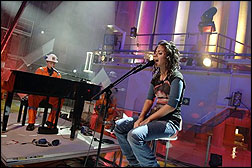 DEPTHS OF THE FORBIDDING NORTH SEA (AP) — Singer Katie Melua set a world deep-water record by performing a concert 994 feet under the North Sea in the leg of an oil platform, the rig's operator said Tuesday.

The Georgian-Irish artist and her band performed two, hour-long concerts Monday at the bottom of a hollow concrete leg that helps support the Troll A offshore platform, the Norwegian oil company Statoil ASA said.

"This was definitely the most surreal gig I've ever done," said Melua, 22, whose albums have sold more than five million copies worldwide.

Craig Glenday, editor of the Guinness Book of Records, confirmed the record for "the world's deepest underwater concert performed in front of an audience."

Melua flew to the platform by helicopter. The concerts, watched by offshore oil crews, helped celebrate the 10th anniversary of natural gas production at the Troll A platform, about 55 miles off the coast of the western Norwegian city of Bergen.

The 1,548-foot tall Troll A platform was towed to the offshore field in 1995, making it the largest structure humanity had ever moved. Statoil's platform, whose mostly underwater structure is taller than the Eiffel tower, is supported by four vast concrete legs, or shafts, on the ocean floor.

According to her Web site, Melua trained extensively for the concert, "including escaping through the window of a submerged helicopter."