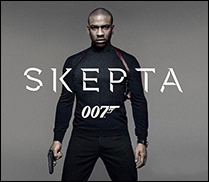 LONDON (CelebrityAccess) — British grime artist Skepta has won the 25th Mercury Prize for his fourth studio album 'Konnichiwa', which was released in May.

Shaun Keaveny hosted the first part of the Awards Show featuring live performances from the shortlisted ‘Albums of the Year’ including The 1975, Kano, Bat For Lashes, Jamie Woon, Laura Mvula, Michael Kiwanuka, Savages, The Comet Is Coming, Anonhi and Skepta. There was also a special performance by Michael C. Hall, the principal performer in the play ‘Lazarus’, to represent the David Bowie ‘Blackstar’ album. Radiohead premiered a 'Present Tense.'

The Hyundai Mercury Prize ‘Albums of the Year’ celebrate and promote the best of UK music, recognizing artistic achievement across a diverse range of contemporary music genres. The 12 albums were chosen based solely on artistic merit by a panel of judges including Jessie Ware, Naughty Boy, Jamie Cullum, Clara Amfo and Jarvis Cocker.

Following news of his win, Skepta announced that he was pulling out of a planned tour of Australia and New Zealand, citing an 'unexpected personal reason.'

“With deep disappointment, Skepta is not able to travel to Australia and New Zealand at this time for an unexpected and personal reason. His tour, planned to commence on Saturday 17 September 2016 is regrettably cancelled. Full ticket refunds will be available on all shows from point of purchase. We are working in close conjunction with the Artist’s booking agency and management in order to organise a new run of shows in 2017,” said the official statement announcing the cancellation. – Staff Writers