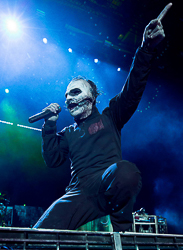 A June 10 Slipknot concert at Price Cutter Park in Ozark, Mo. has come under attack by the grocery store chain that has the naming rights to the 6,000-seat baseball stadium. More than 40 noise complaints, including some complaining the bands used profane language during and between songs were phoned in to the police.

Ramey-Price Cutter President/CEO Larry Willis said the company would pull its name off the stadium if another "offensive" act performs there, reports the Springfield (Mo.) News-Leader; Willis said customers are blaming the chain for bringing in a concert many in the community found offensive.

Chain spokesperson Cathy Olson said the company will only support "good, clean, healthy entertainment for children and families" and the company has now asked to see a list of all upcoming acts and would evaluate each act individually.

Concert organizer Todd Rahr, who is also vice president of OMS Inc., which owns Price Cutter Park, called the performance 'atrocious' and said the area is not appropriate for those types of bands, the paper reports.