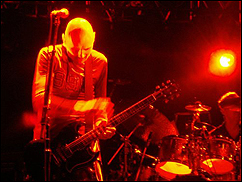 HAMMOND, IN (CelebrityAccess MediaWire) — The Smashing Pumpkins are gearing up for their 20th Anniversary Tour. Consisting of "unique songs and sets," the tour will focus on smaller, more intimate venues before taking to the main stage at larger venues in November.

Kicking off in August, the tour will carry the Pumpkins around North America until November. Thus far, only one date has been announced, an August 8th gig at newly-opened, 2,300-cap. The Venue at the Horseshoe Casino in Hammond, Indiana. Other cities mentioned but not confirmed include: New York, Chicago and Los Angeles. These shows will focus on the band's history, legacy, and accomplishments over their career.

A previously planned Gish-era tour has been pushed back to 2009.

"The August tour is going to be a blast. Expect a very loud and raucous show from us, and we are very, very happy to know we will finally be playing our own shows come November in New York, L.A., and Chicago… The 20th Anniversary shows will be magical… We are already working on lots of surprises." said Billy Corgan. – CelebrityAccess Staff Writers