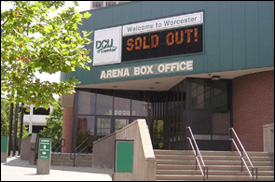 WORCESTER, MA (CelebrityAccess MediaWire) — City of Worcester has extended their management contract with SMG over the DCU Center arena for another 5 years, the company announced.

The arena, which includes an attached 50,000 square foot Convention Center, just completed a $31.5M renovation last summer. Improvements at the facility include infrastructure upgrades, more amenities, better access and new energy conservation technology. Other upgrades include a refurb of the inside and outside design, a new digital marquee, a redesigned box office pavilion, an expanded concourse, 4 luxury event suites, indoor/outdoor retail space and a new concourse-level club area.

Since reopening in October, the arena has hosted 16 events, including 4 sold-out concerts with Pearl Jam and Phish.

“The DCU Center is a top performer in the industry, posting record numbers for the month of October,” said,” Wes Westley, President and CEO of SMG. “The partnership between the management staff at the venue and the city is a success story that we know will continue for many years to come,” Wes added.

In addition to the DCU Center, SMG has also been tapped by the City of Worcester to operate the Worcester Common Oval, a public ice skating rink on the common behind city hall, for the 2nd consecutive year. – Staff Writers