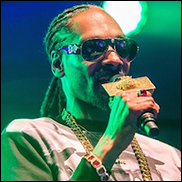 OREBRO, Sweeden (VIP NEWS) — On Saturday evening Snoop Dogg was arrested in Sweden on suspicion of using illegal drugs and the rapper has responded in a way that is pure Snoop Dogg.

43-year-old, known for his love of marijuana, was detained and later released after undergoing a sobriety test at a police station. He later posted several expletive-filled responses, including videos slamming Swedish police. Snoop had performed that night at the Stadsträdgården in the city of Örebro.


He posted on Instagram a video of himself and his entourage "getting sweated by the police."


"On my way to a police station in Sweden," he said in an Instagram selfie video that appeared to have been filmed in the back of a squad car. "Sorry about that, all the fans in Sweden. I`ll never be back to this country. Ya`ll can thank your police chief and all the people that run your police department. It`s been real. Thank you, but I`m gone."


Daniel Nilsson, a police spokesperson for the central Uppsala region, told the Swedish news site The Local that police carrying out roadside controls saw Snoop Dogg`s car was pulled over and that the rapper "seemed to be under the influence of narcotics,"


"He was arrested and taken to the police station to take a urine test," he said. "The incident lasted several minutes. Once the test was carried out, he left."


The results of his test were not revealed and it is unclear if Snoop Dogg was under the influence or he was found in possession of unauthorized substances. In Sweden, cannabis extracts are classified as illegal narcotic drugs. Marijuana is legalized or decriminalized in many parts of the United States, including in Los Angeles, where Snoop Dogg lives, mostly for medicinal purposes.


Snooper later posted another clip showing him inside what appears to be a police station.


"Profile, racial profile," he said. "Came and snatched me out of my car."


He also wrote, "On my mamas im sick and tired of the pigs. N America n these countries that jus don`t respect us f–k that new me new u u do we do 2."


In another, black-and-white selfie video, Snoop addresses his fans again.


"What up, it`s Snoop Dogg. I know a lot of ya`ll are concerned about me. I made it through," Snoop said. They took me down there, made me pee in a cup, didn`t find s–t. No case, no nothing."


"2 all my sweden fans U can blame YA police dept for never seeing me again in your beautiful country," he added. "It`s allways a few dicks that f–k it up for everybody. It`s been real thank u Jah bless. !! F–k the police. And I`m still smokin."