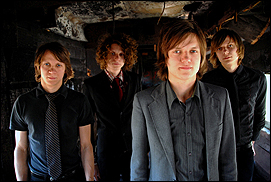 NASHVILLE, TN (CelebrityAccess MediaWire) — SONSOFDAY (pronounced Sons of Day) is not your typical Christian band. The four-piece alternative rock group based out of Portland, Oregon, is unique, and their story reads more like a screenplay than a typical band bio. They immigrated from Ukraine to the United States in 1992 in pursuit of a better life and religious freedom, which Ukraine was only just beginning to experience after the fall of Communism.

The four Belonozhko brothers make up SONSOFDAY, the Red Hammer Records band now traveling the country to promote their debut album 'Fragile People.' The quartet is comprised of Vlad, age 21, on vocals and guitar; Roman, age 24, on lead guitar; Bogdan, age 19, on drums; and Scott, age 17, on bass.

The Belonozhko brothers were born in Cherkasy, Ukraine, where their family worshiped Christ in the underground church. This was at a time before the collapse of the Soviet Union when Christianity was illegal. After the fall of Communism, it became easier for families to immigrate to the United States, and the Belonozhko family left for America, in pursuit of religious freedom and a better life.

Settling in Portland, the family became involved in starting a charismatic church for Russian-speaking people called the Christian Center in Spirit and in Truth. The Bible-based church was founded to serve as an alternative to the more legalistic Russian churches in that area.

The band was formed in 2005 by Roman, who only needed to look within his own home for the other elements of the band, as he had three brothers with the same talent and desire to reach young people for Christ through music. SONSOFDAY cites such musical influences as U2, Lifehouse and even Johnny Cash, of which Vlad explains, “I watched the movie 'Walk The Line' and I was so impressed with Johnny and all he had overcome. I enjoy his music, but his personal story and his testimony for Christ really inspired me.”

After a few years of writing songs, practicing and playing live, SONSOFDAY caught the attention of Darren Bowls at Red Hammer Records. In 2007, and with Bowls in the producer's chair, SONSOFDAY recorded their first full-length CD for Red Hammer Records titled Fragile People, which includes the singles "Reconcile" and "This Place," for which the music video has received extensive airplay on numerous Christian television networks. –by CelebrityAccess Staff Writers