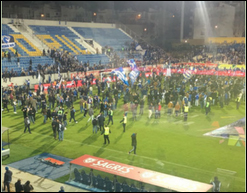 LISBON, PORTUGAL (CelebrityAccess) A soccer game in Portugal’s Primera Liga was abandoned Jan. 15 after cracks appeared in one of the stands.

The match was halted, then canceled. Etoril Praia was playing against Porto in the Primeira Liga arena, with 2,500 Visiting fans rooting for Porto were occupying the stand in question. They were asked to leave their seats, and they walked across the field to join fans of the home team, which then led to fears of overcrowding, which led to police and security officials calling off the game, according to Panstadia & Arena Management.

“After a meeting between Estoril Praia, FC Porto, Liga Portugal and security forces, it was concluded that it was not safe enough for the game to continue,” Esoril Praia said in a statement. “The abandonment is linked to the fact that part of the north side of the Estadio Antonio Coimbra da Mota had sustained damage, which caused some alarm. That led the authorities to safely evacuate the entire stand.”

The Monday night game occurred the same day there was an earthquake in southern Portugal with minor tremors felt in Lisbon; the arena is located approximately 25 kilometers away from that city, Panstadia noted. The 8,000-capacity arena was built in 1939 and the stand in question was likely built in 2014, the report said.