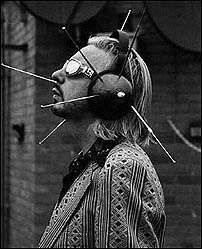 Musician Dave Stewart has said he will "look after" artists involved in his collapsed entertainment company Artist Network. The venture was founded by the Eurythmics guitarist a year ago as an idealistic alternative to traditional record companies.

Its aim had been to provide bigger royalties and more creative freedom to its artists.

But now it has now entered a enter a Company Voluntary Arrangement, which companies can do when they run out of money.

Stewart's spokesman told BBC News Online that it was a priority to find a new home for the label's acts.

"Dave at the moment is trying to get deals for all the artists," he said.

Artist Network had been launched with financial backing reportedly worth $10m (£6m).

But its ambitions were dealt a blow when its relaunched Marquee Club in London closed with cash flow problems in January.

Stewart told the Financial Times: "In the end we just weren't getting enough money.

"It turned out to be very difficult to establish an independent record company."

A separate $100m (£61m) London arts venue backed by Stewart called The Hospital is said to be unaffected by the company's demise.

The Hospital, based in a seven-story building in Covent Garden, will house a TV studio, art gallery, private members' club and restaurant.

It will open in stages over the next few months, starting with the studio next month.