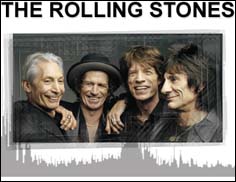 LOS ANGELES (CelebrityAccess MediaWire) — Blogs were abuzz this weekend with renewed speculation that iconic rock band The Rolling Stones may be the next major artist to join the Live Nation consensus after being lured away from their longtime home at EMI. The Stones however, have worked to downplay such rumors but have been seemingly unwilling to put the matter to rest entirely.

"We are not in talks with Live Nation in connection with any record deal," London-based Rolling Stones spokesman Bernard Doherty said on Monday, reading from a brief statement. Note the specificity of his comment – Doherty did not say that the band wasn't in talks with Live Nation, just that there was no ongoing talks about a record deal. This leaves the door open for other possible agreements such as merch and touring, similar to U2's recent deal with the promoter. The Rolling Stones tours since 1989's hugely-successful "Steel Wheels" tour have been produced by Live Nation's Michael Cohl (With CPI) and it seems likely that such a relationship will continue for future efforts.

This most recent round of speculation was sparked by news weekly The Observer, which reported over the weekend that according to unidentified "sources," the Stones were on the verge of exiting from EMI after 30 years and were close to "clinching a deal with Live Nation." The report noted that such a deal would be a major blow to already struggling EMI, costing them as much as 3 million pounds per year in lost revenue from the band's back catalog.

Speculation about the departure of the Stones, who's contract with EMI comes up for renewal soon, has been exacerbated by the Stones releasing their latest album, the recording of "Shine A Light" on rival label Universal. Taken over last year by private equity firm Terra Nova, EMI has been shedding employees by the thousands in a drastic restructuring and that restructuring has included artists as well with several major names such as Radiohead and Sir Paul McCartney leaving the label fairly rapidly after Terra Firma arrived on scene and many observers think that the Stones are likely next.

"It is probably safe to assume that the [Rolling Stones] will be walking away," one unidentified observer familiar with the situation told Reuters. – CelebrityAccess Staff Writers