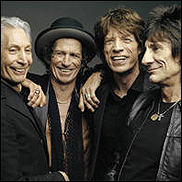 NEW YORK (CelebrityAccess MediaWire) — “A Bigger Bang” has made the biggest splash worldwide, with the Rolling Stones predictably leading global touring grosses for the first half of 2006, according to CelebrityAccess/Billboard Boxscore.


Based on reports from November 1, 2006 through mid-May 2006, the Rolling Stones tour, produced by Michael Cohl, reported $147.3 million in grosses from 45 shows in U.S. arenas and international stadiums.

Cohl told Billboard that the period covered were high times for the Stones.

The band also toured Down Under for stadium dates and “actually had a better Australian leg this time than we did before,” said Cohl. “It’s kind of astounding when it keeps improving 43 years later.”


U2 came in second for the mid-year totals, but could have improved it’s already hefty grosses of $73 million had it not postponed a string of dates due to a family illness. The shows have been rescheduled for later in the year.

Other acts to post high figures for the first half of the year include Billy Joel at $47.4 million, Cirque du Soleil’s Delirium at $38.7 million, Aerosmith at $35 million, Coldplay at $29 million, Luis Miguel at $25 million, the Trans Siberian Orchestra at $24 million, and Paul McCartney with $17.6 million.

The North American touring industry seems to be on the rise from a multi-year slump, with gross figures up 24.6% from the same period last year, driven mostly by the tours listed above. Attendance, however, is only up by 5.4%, marking a major rise in ticket prices rather than public interest.

Worldwide, revenue is up by 13.3% and attendance by 2%. –by CelebrityAccess Staff Writers