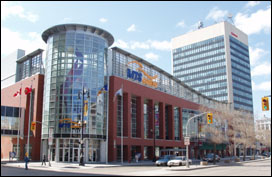 WINNIPEG (CelebrityAccess MediaWire) — Some local firefighters have aroused the ire of some members of the International Alliance of Theatrical and Stage Employees (IATSE) who feel that they've been shortchanged by firefighters moon lighting at the MTS Centre as riggers The Winnipeg Sun reported.

The IATSE stagehands, who have who have rigging shows at the MTS Centre for decades have been losing work to firemen. "They get trained as high-steel riggers with the fire department, then go to MTS Centre to utilize those skills," IATSE spokesman Barny Haines told the Sun.

The MTS Centre has been embroiled with the IATSE since it opened and union workers have taken to picketing at the E. Kildonan Fire & Paramedic station in a protest which was timed raise awareness while Crosby, Stills, Still & Young, one of the arena's most high profile concerts to date.

Stagehands claim that Dan Wasylkiw, an ex-IATSE member who is now a firefighter has been recruiting other firefighters to work off-hours at the arena. Wasylkiw could not be reached for comment.

United Fire Fighters Of Winnipeg Alex Forrest made a counter claim that the MTS Centre did not have a contract with the IATSE and that arena managers True North Sports & Entertainment Ltd. aren't obligated to hire union workers.

"What's making me upset is that some of these guys are even being called scabs," Forrest said. "But individual members on time off have the ability to do what they wish. How powerful do they think a union is to control members on their time off?" – CelebrityAccess Staff Writers