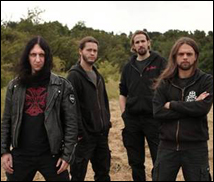 NEW YORK (CelebrityAccess MediaWire) — Suidakra will hitting the road to tour the U.S., kicking things off this coming Monday March 8th with a gig at B.B. King's in New York City. The tour will be packaged with Israeli metallers Orphaned Land. The tour with Orphaned land will also be stopping in Montreal, Toronto, Chicago, and Austin, TX for a SXSW gig. The Austin, TX gig will be a part of the SXSW music festival. In conjunction with the SXSW performance, ICS Festival Service GMBH will be presenting the Wacken Metal Meeting. More details on that can be found below. Suidakra has also scheduled 3 headlining shows on the tour, one in San Francisco, one in Los Angeles, and one in Ramona, CA.

Suidakra bassist Marcus Riewaldt had the following to say about the tour, "This tour will be another great experience for Suidakra, we are 100% sure.
The East Coast and Canadian shows with Orphaned Land will be interesting, because we have never played together with a band performing "Israeli metal"… It surely will be a peaceful event, albeit we will unleash our "Celtic Wartunes" upon our fans! Haha. It's great to be invited to SXSW in Austin, TX, too. We have heard a lot about this music festival and we are looking forward to meeting business partners we have worked with in the past and of course also some new people that we hope to work with in the future.

Plus all the BBQ's!!! The icing on the metal cake is that we will be playing our first headlining shows on the West Coast! California has been good to us the last few times we played there, so we're expecting some awesome shows now that we'll be playing a full set!! Even though it's just a mini tour with 8 shows in two weeks, we're still covering the East Coast, Canada, Midwest, the South and the West Coast… Feel free to call the German efficiency!
Haha. Just kidding… Anyway we're excited and happy to be back… See you there!"

The company responsible for producing the world's largest heavy metal festival "Wacken Open Air" will be making their presence known this March at the SXSW Festival. Thomas Jensen, organizer and managing director of ICS Festival Service GMBH and his crew are hosting The Wacken Metal Meeting on Wednesday March 17th, if you would like to attend The Wacken Metal Meeting, please send an email RSVP to Miriam@ics-woa.de