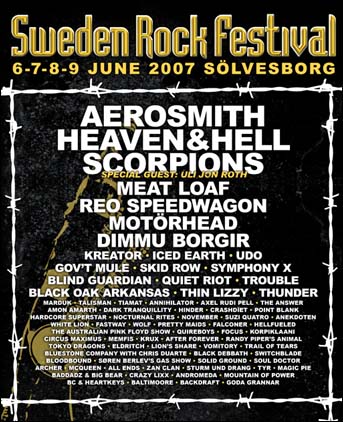 NORJE, SWEDEN (CelebrityAccess MediaWire) — This year Sweden’s national bank holiday occurs one day before the start of Ingolf Persson’s Sweden Rock festival. Because of this the festival has decided to expand this year’s festival by one day and open June 6th, Sweden’s Flag Day since 1916, and its official National Day since 1983. The reasons for the choice of Sweden’s Flag Day date are twofold: the election of Gustav Vasa as Sweden’s king on 6 June 1523 laid the foundation of Sweden as a separate state; and on the same date in 1809, Sweden adopted a new constitution which included the establishment of civil rights and liberties.

Sweden Rock usually has over ten thousand people on the festival site every day prior to the start of the festival, so why not start early?

Sweden Rock celebrates its 16th year, on the Baltic coast of southern Sweden, and added a third day five years ago and each has sold out all days over the past four years. Over the years the festival has become on of the main rock festivals in Europe and attracts fans and media from more than 30 countries. It’s a big festival with its main focus on the heavier aspects of music.