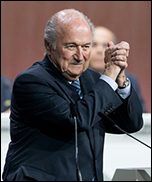 ZURICH, Switzerland (CelebrityAccess) — Sepp Blatter, the longtime president of FIFA, is now facing a criminal investigation for “suspicion of criminal mismanagement and suspicion of misappropriation" of funds, according to the office of the Swiss attorney general.

Swiss authorities have reportedly interrogated Mr. Blatter on Friday and also searched, and seized data from, his office at the headquarters of FIFA, world soccer’s governing body, according to the New York TImes.

Swiss officials said they were focusing on a pair of financial transacations, one of which involved a contract with the Caribbean Football Union and its president at the time, Jack Warner which was unfavorable for FIFA.

The contract, obtained by the Swiss broadcaster SRF, which posted excerpts on its website, saw television rights for the 2010 and 2014 World CUps awarded to the Caribbean Football Union for a total of $600,000. Warner, then the president of the CFU, licensed those rights for a reported $20 million. Warner was one of several FIFA officials who was arrested in February and charged with wire fraud, racketeering and money laundering. Warner is currently facing extradition to the U.S.

The second alleged transactions involves Michel Platini, the head of European soccer’s governing body. Swiss authorities allege that Blatter may a "disloyal" payment, one that goes against the best interests of the concern, of 2 million Swiss francs to Platini for unspecified work carried out between 1999 and 2002. Platini is widely regarded as Blatter's heir apparent at FIFA.

“Mr. Blatter is cooperating and we’re confident that when the Swiss authorities have a chance to review the documents and the evidence they will see that the contract was properly prepared and negotiated by the appropriate staff members of FIFA who were routinely responsible for such contracts,” Blatter's attorney Richard Cullen told the New York Times. “Certainly no mismanagement occurred.” – Staff Writers