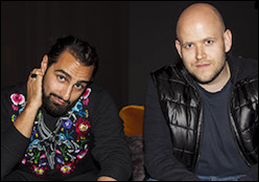 
Daniel Ek, CEO-founder of Spotify, and Ash Pournouri, founder of At Night Management (Avicii), will be hosting the inaugural Symposium Stockholm June 8 through 13, anchored by the tech and music-based Brilliant Minds Conference on June 11 and 12.


Ek argues that Sweden is already a model for the future of content consumption and technology: HBO has been available as an a la carte subscription for years, while the major sports leagues have also cut deals that exclude cable and satellite partners.


"I wanted to cast an eye on how those consumption behaviors can lead to creativity thriving,” Ek says. “A lot of that dialogue seems to be happening in the U.S., but if you’re a technology executive and you want to see how rapidly something can get adopted, look to Sweden, which has the third-highest per capita usage of new technologies."


"The reception [in Sweden] has been great, and everyone feels it’s about time someone did something like this," says Pournouri. "I don’t think it’s going to come from politicians because they’re not incentivized in the long run for focusing on the politics, we’re focused on all issues and problems. I just felt this responsibility was with us: if we don’t do it who will?" –According to Billboard