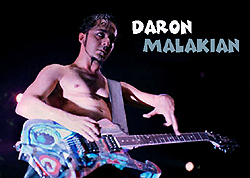 Sony Music has entered into an exclusive, worldwide agreement with Daron Malakian, guitarist/writer/producer for the multi-platinum band System of a Down, to market, promote and distribute EatUrMusic, Malakian's new label, under the EatUrMusic/Columbia Records imprint.

"We're very excited about working with Daron in establishing EatUrMusic as a credible artistic force in today's music scene," said Will Botwin, president, Columbia Records Group. "This new imprint promises to become a home for artists who are both passionate in their vision and uncompromising in the integrity of their music."

“I honestly feel that if you’re going to sign an artist,” commented Malakian, “the most important thing is that you’ve really got to be like one of those kids in their audience. Donnie, (Ienner, president, Sony Music U.S.) Will (Botwin) and I agreed that I will only sign and work with those artists that I’m a fan of.”

Malakian’s first signing to EatUrMusic is the punk-metal rock group Amen, fronted by Casey Chaos. Malakian is producing the CD with Chaos, Mike Frasier (AC/DC, Aerosmith, Metallica) is mixing, and the album is due out later this year. Huge in the UK for the past several years, Amen recently sold out their entire UK tour three weeks before they set foot on English soil, despite the fact they hadn’t released a new CD there in nearly two years. In addition, the group was the only unsigned act to play the Main Stage at last year’s Reading Festival.
“I’m proud that Amen is my first signing,” Malakian continued. “Casey is the Iggy Pop of my generation, he’s creating his art and his music on his own terms, and I’m very happy that I have an outlet to support that.”