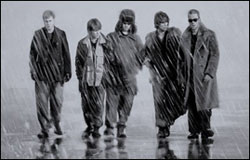 AUSTRIA (CelebrityAccess MediaWire) — Take That frontman Howard Donald was hospitalized after a chest injury during a show that resulted in a punctured lung. Howard was taken to a hospital in Austria to recover, missing a gig in Vienna which went on with the remaining three members of the band.

Howard said that "I’ve never had to miss a show before, it’s unbelievably frustrating being sat in a hospital when I should be on stage with the guys,"

A publicist for the band declined to speculate on how the injury occurred.

His recovery is reportedly going well and he is expected to be back on the tour by the time the band hits Germany. – CelebrityAccess Staff Writers