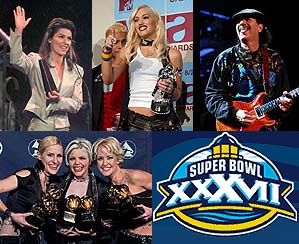 “Anyone who tells you there’s no pressure to sing the National Anthem ‘live’ to one of the biggest television audiences on the planet is not telling the truth,” said Emily Robison. “Sure, I’m a little nervous, but we’re all also very excited and honored for the privilege.”

“It will be the first appearance we’ve done since Emily had her baby in November,” said Martie Maguire. “With Emily’s new baby and Natalie’s toddler, our biggest challenge for this event might be trying to find good babysitters on Super Bowl Sunday!”

Bob Best of Best Productions in Tampa, Fla. will executive produce his 19th pregame show for the NFL; He will be assisted by consulting producer Roddy White.